In the basement of Arion Press in San Francisco, where they still print books the old-fashioned way, Lewis Mitchell slides open a box of parts used to change the font size on the Monotype casting machines he has maintained for 62 years.

“I thoroughly enjoy the sound of the machines turning, and seeing the type come out is a joy,” Mitchell said. He can tell by the sound of the moving springs and levers if something is awry with his machines — a skill he said all good technicians should have. Four different owners have run the business since Mitchell walked through the doors aged 18, and he has had several opportunities to leave, including a scholarship to the Massachusetts Institute of Technology that he declined.

Now 80, Mitchell can’t imagine retiring from the job he loves so much. When Mitchell started making this kind of type, it was really the only way to print things, and now he doesn’t know how many books he’s helped print over the decades. There were once type-casting operations in most major U.S. cities, but now the practice is almost extinct.

There are only two companies left in the world that cast type for printing presses, and Arion is by far the largest. Mitchell has four grown children and nine grandchildren, but he calls the 20 type-casting machines his “babies.” “I treat them with kindness. I don’t use a hammer on them or an oversized screwdriver.” The first machine, which started the company during the 1915 Panama Pacific International Exposition, is still its best machine — proof that Mitchell’s methods work. “My dad taught me from square one if you’re going to do something, you either do it right or you don’t do it.” 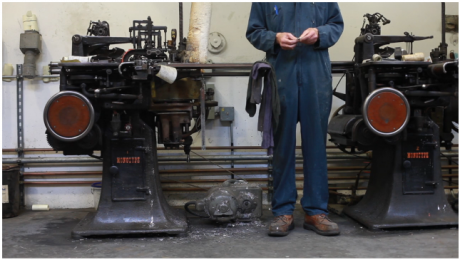