The English Group’s oft used photographer Katherine Wood is at the WOMAD festival this weekend, and she’s emailed in to us a selection of snapshots that she took on the first day of the festival; starting with Friday’s headline act, the legendary Jamaican reggae star Jimmy Cliff…

While the day ended with a fabulous set by Jimmy Cliff, resplendent in gold adorned red leather and jiving around the stage at a pace hardly expected of of a 74 year old, the best thing about WOMAD is the atmosphere; it’s the happiest of festivals. There’s such a friendly vibe everywhere, all day long, and an audience that comprises little kids – there’s a whole ‘World Of Children’ mini-festival space set aside for them – right through to pensioners who have clearly been attending WOMAD for all of its 30 year history (judging by the mix of event Tshirts that many seem compelled to wear).

And while WOMAD (World Of Music And Dance) boasts a festival line up of some of the most fascinating acts from all across the world gathered together in one place, there’s also a World Of Food too, and it doesn’t take long to have over-eaten, chasing one’s desire to sample Goan fish curry (for breakfast!), chilli made with buffalo beef for lunch, and the best hog-roast in the UK – it said so on the side of the stall – for supper!

Best of all, the weather was glorious -so so hot! – and with flags WOMAD’s brightly coloured flags flying in the breeze everywhere, the Charlton Park site was a visual delight in so many different ways.

The first act that we watched was Norwegian singer Ane Brun. It’s great when one discovers fabulous new music and I have already this morning downloaded her latest album, ‘It All Starts With One’. Apparently she sings regularly with Peter Gabriel and her voice, guitar playing, and performance were all sublime.

…oh, and I musn’t forget all the stalls showcasing the work of such a broad mix of good causes. Bottletop were there and one that really caught my eye was Pants For Poverty – you’ll see exactly why from the photographs! -promoting their work to alleviate poverty in India. (You can read more about their work here).

Above all though, festivals are full of fascinating people letting their hair down for the weekend and here’s a few snaps too of people that caught my eye; the guy with great dreads had such a handsome face and at WOMAD he may well have come all the way from Ethiopia (or just as likely Ladbroke Grove, I shall have to ask him if I see him again), an attractive girl shielding herself from the sun under a lace parasol, the pretty girls all wearing shorts with far far too much emphasis on ‘short’!, and the most beautiful tattoo’d woman(from Reading) who really caught my eye – I admit that she has quite captivated me – and I’m rather excited to say that I shall now be photographing soon.

Another wonderful act that I watched today was the funky London singer Hollie Cook, I’d not heard of her before, but was intrigued to discover that her father is Paul Cook of the Sex Pistols. Go find her music, trust me it’s perfect for these hot summer days.

And if not quite better still, we even shared in her giving a really amusing cooking lesson on the Taste The World stage a little later in the afternoon too.

…a Norwegian salt cod dish should you wish to know.

As anyone who goes to festivals knows, they’re hard work, draining, and for us a real highlight was that we had passes to the wholly more luxurious WOMAD spa; a wonderful little enclave that not only had immaculate clean toilets for those with passes – as a festival goer you will know why I type this! – but cushions and benches to relax on all in the style of a beautifully regal Moroccan desert tent… …and the very best expresso coffee to help recharge one’s batteries (and good ‘ol West Country cider to equally help one unwind).

Also worthy of a special mention – in the Siam tent, but all the way from India – was the altogether magical ‘The Manganiyar Seduction’. If you can imagine the whole of the already large stage divided into 36 silk curtained boxes (each surrounded by old style light bulbs), and with red plush curtains drawn, maybe you get some hint of what is a most simple and yet impactful stage set I’ve seen in a long while. Anyway, the performance starts with one of the sets of curtains opening (the lights of that square coming on) and a single white robed Indian musician playing plaintive notes on a sitar. Eventually a second set of curtains open and the sitar is joined by beautifully sad and passionate Indian voice. Eventually whole banks of curtains are open and groups of voice are joined by banks of sitar players alongside other blocks of Indian drummers – to the extent that a conductors needed now too – and it’s breathtaking.

So, while day one at WOMAD is itself a bit overwhelming at times (always in the best best good way), maybe I’m in my groove now and while the first few snapshots will hopefully entertain you, I’m sure that I’ll take more, with a little more focus towards picture taking, today and tomorrow too.

I shall look forward to seeing any new photography of WOMAD over the next few days. 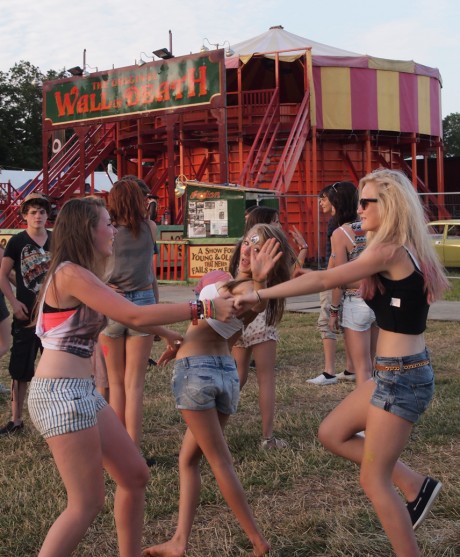 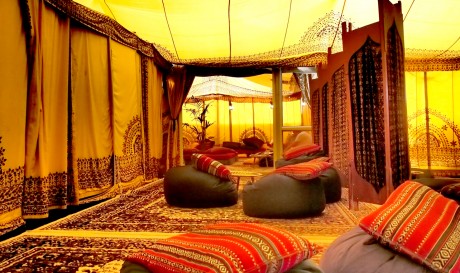 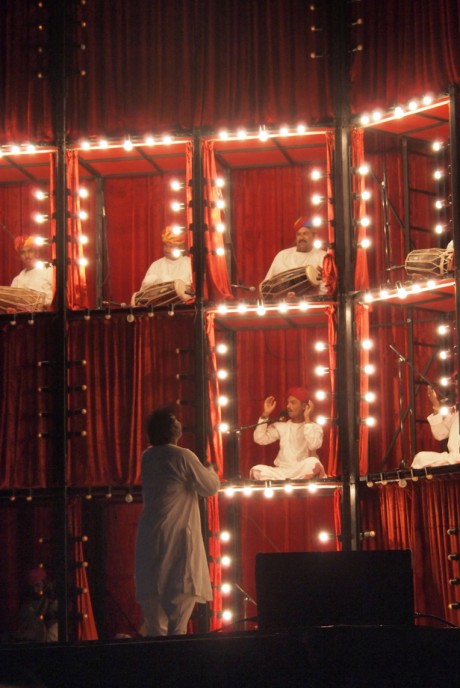 […] Here’s photographer Katherine Wood’s musings from day two of Peter Gabriel’s 2012 WOMAD festival (you can jump back to her Day One article here): […]

[…] you can our WOMAD: Day One article here and Katherine’s WOMAD Day Two pictures […]