Written by Giuseppe Di Lampedusa during the middle of the 20th century and published posthumously, The Leopard is set in Sicily during the early stages of Italian unification, nearly a century prior. The novel opens with its main character Don Fabrizio, the Salina family prince and bon vivant. The melancholy tale spans nearly 50 years, mapping the complications of the Salina family with its varying allegiances and views towards the end of the Sicilian state. It is a novel about change: a new social and political order, and a family’s subsequent reckoning with the shifting tide. Fabrizio’s nephew Tancredi, who has aligned himself with the unification efforts, proffers one of the book’s most memorable lines: “If we want things to stay as they are, things will have to change.”

Designer Oliver Munday in his own words:

“When I set out to work on this project, Pantheon’s managing editor called me into her office. A pile of paperbacks was heaped on her desk. She told me that every art director that preceded me had designed a cover for The Leopard. This added an unforeseen complication to the process. I would have to bring something new to the cover, otherwise what would be the point?

The first direction, seen below below in two parts, began with a simple graphic element: a leopard’s spot. I was interested in this as a graphic device, especially when viewed in a pattern. Seen at the right scale one might notice their resemblance to islands. I dug up some old photos of 19th century princes from Sicily and began to see what would happen if the aforementioned spots housed a portrait. The results were exciting; there is an inherent drama to the occlusion of parts of the human face. This direction raises interesting questions about its subject, a mystery surrounding the figure seen within the spots. I liked how this could be open to interpretation: was the visage coming apart? Hiding from something? Disappearing? I was careful not to show too much of the portrait, in an effort to avoid a literal interpretation of Fabrizio. Though loosely based on Lampedusa’s family, this is a work of fiction, and I didn’t want it to suggest otherwise. Another thing to consider was Primo Levi’s cover which I had recently completed: it features an aged black and white photo as a main element. I feared this to be too similar, and since the first three back-list covers would be coming out in fairly quick succession, I considered the gestalt of the set. I wanted them to each feel fresh and unique, but of a piece. This proved enough to abandon the photographic portrait altogether, and pursue something completely different

I kept thinking about the previous Leopard editions. What similarities did they share? What could I do to set this new one apart? A definite attribute absent from the earlier covers was brightness; most of them were white and/or photographic. Maybe there was something to be explored with color; something more graphic and iconic? This question ultimately lead me down the path towards the final version.

The final cover, last image, is a graphic double entendre set at the center of a bright green background. The typography is simple: a condensed cut of Bodoni set in all caps, regally placed at the top and bottom, with a thin hand-script ‘a novel’ in the top right corner (a nod to mid-century style). At first glance the image at the center is a crown. In my early research, I stumbled upon an old lithograph of 19th century italian crowns that served as foundation for the simplified rendering. Beginning at the base of the crown I drew a line of jewels as black dots on a yellow vector and immediately noticed its leopard-like quality. The power in this direction would be derived from its central image, but more than that from the hidden secondary image. Upon closer examination of the crown’s formal structure the ‘a ha’ moment revealed itself: a leopard’s paw with its claws extended. The leopard symbolism in the book is manifold, and I was keen on the central image reflecting that. The drama is evoked in the action: the claw appears to be grasping for something, reaching even. Was this Fabrizio? The Aristocracy? Sicily? Some things need to be left open ended.” 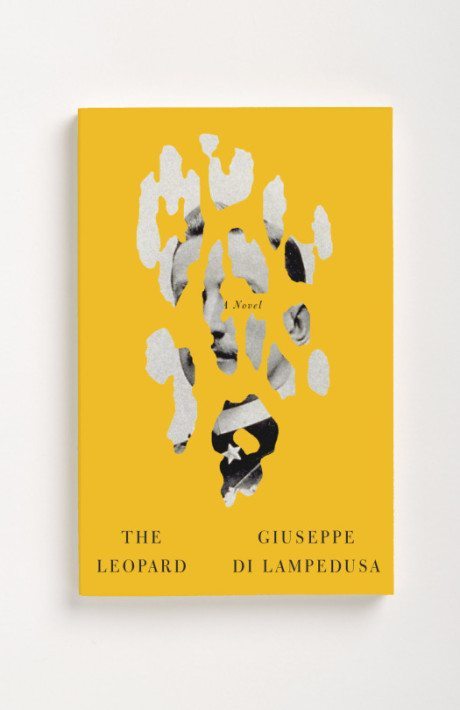 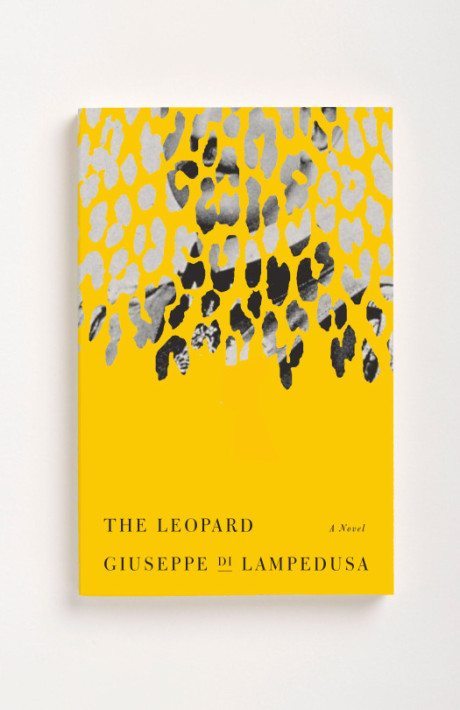 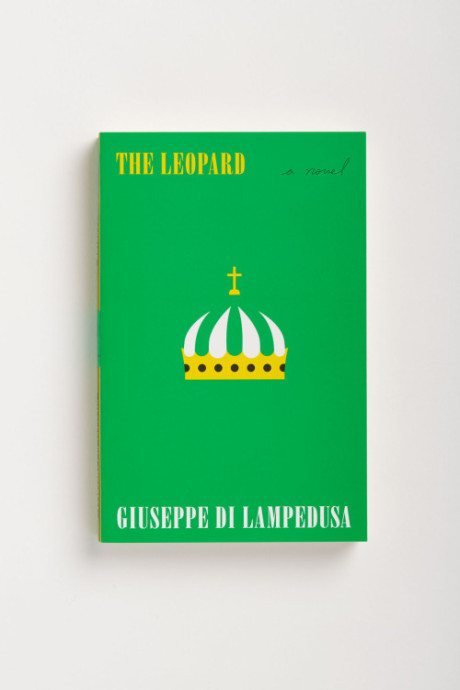